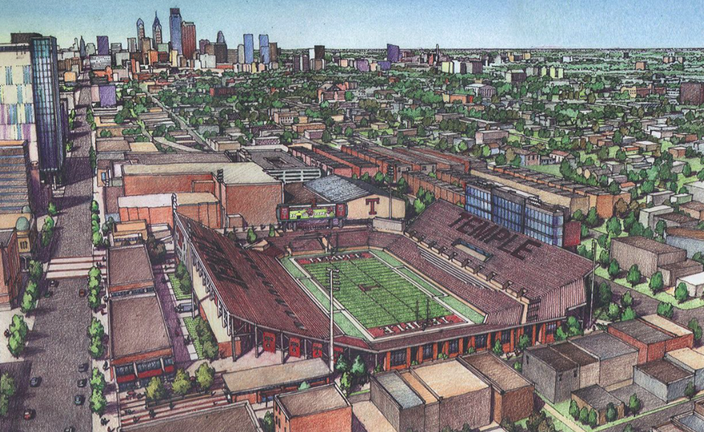 A Chapter Review by Obafemi Ogunleye

In her chapter of Learning under Neoliberalism, Susan Brin Hyatt looks at ways in which corporate interests are invading academic settings and the communities where they are located. The study stems from an ethnographic research project carried out in 2013 by Hyatt and her students at Temple University focused on the experience of North Philadelphia residents regarding change in the area. The semester long project was titled, ‘The Death and Rebirth of North Central Philadelphia’.

The specific context of Temple is situated within trends across the U.S. where elite universities, typically situated near “poor, black” neighborhoods, attempt to re-brand communities through “urban renewal” projects. This chapter is timely, considering the recent protests this week at Temple University regarding plans of building another sports facility in the community.

In the following sections, I will briefly describe the Death & Rebirth research project at Temple University then share how it connects to neoliberalism in higher education.

To begin, I must say that I am inspired by Hyatt’s approach at conducting truly ethnographic research that collaboratively involves not only the community but her students as well. By partnering with a local community development corporation (Renaissance Community Development Corporation), the project gained access to a network of resources that proved to be critical. Students enrolled in Hyatt’s Ethnographic Methods course at Temple University were assigned to select research projects they were interested in within the area. The students were then sent out to ask two sets of questions;

Although, I can appreciate the attempt to make use of symbolic terminology, I feel like associating the community with death was a failure on the authors part, which is a point also reflected in the chapter. Nonetheless. respondents still provided rich information that spoke to ways in which the university played a part in community development.  Data from this research went on to become published in both academic journals and local newspapers.

Hyatt mentions in the chapter that she uncovered far more than she ever expected to when getting into the project. The research reveals a long history of campus expansion further into the North Central Philadelphia community through private acquisition and eminent domain (compulsory purchase). One main reason for such an urgency in renovating the area was the media’s portrayal and public perception of the community surrounding Temple as a “ghetto”, which made it difficult to attract top talent. The president from 1981-2000, Peter J Liacouras, is regarded as an instrumental figure in the “urban planning” associated with the university, and launched the iconic, “Temple Town” initiative.

“Temple Town” was a multi-million dollar development project designed to move the institution from a commuter school to a residential campus and ultimately attract more affluent students. With such a project comes displacement of residents already living in this area who are seen as victims of circumstance and expected to fend for themselves. The chapter provides details of specific moves that were made on behalf of the university to strategically acquire properties for its growth without considering input from community members. Issues include; private partnerships, legal reform, unfulfilled agreements, and more.

Hyatt definitely takes a critical view of neoliberalism within U.S. universities and highlights how it has become a tool for advancing the marginalization and under-representation of surrounding communities. She also juxtaposes this population with private elites who are seen as far more influential in dealings with university leaders. This brings us back to the common question of whether higher education is a public good or private investment, or is it on a spectrum and how does that work?

Me being new to the scholarship concerning neoliberalism, I have been exposed to new ways of viewing university development through this chapter. Hyatt posits that when “urban renewal” takes place, it is private real-estate developers and corporations who reap the  benefits. Furthermore, across the board for higher education governance, we can see the outsourcing of departments in an attempt to “maximize profits and minimize costs”. The problem is not necessarily that organizations are making profit but that the organizations have no connection to the communities that they are working in and do little or nothing to cater to local needs. For a refresher, a short list of privatized goods and services at many higher education institutions include;

Many of these items are seen as necessary to outsource due to decreasing amounts of funding from state and federal agencies. After all, where exactly will the money come from? For some, enterprising institutions are seen as engines for economic growth which should find ways to generate revenues and be self-sufficient; all for the greater good. In response to neoliberal supporters, Hyatt agrees that higher education institutions hire large numbers of people but reminds us that these positions are typically, low-wage jobs with minimal access to university benefits.

I think this debate is complex yet necessary and projects like Death & Rebirth do a good job of guiding the conversation. I’m looking forward to reading more studies that use ethnography as an approach to critical research in this same vein. Feel free to share your thoughts and let me know if you end up reading the chapter/book.